A Choice Of Secrets by Barb Hendee will be released on November 13th, 2018 for purchase. I was lucky enough to receive a pre-copy from Kensington Books and Rebel Base Books. The novel is a light historical fiction that is deep and hilarious to read! 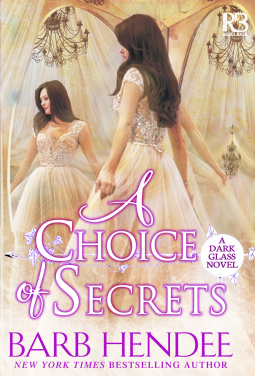 I really enjoyed reading this novel from the first word because although it touches on some seriously deep topics, the comedy throughout it all was quite refreshing. From the very beginning I was laughing constantly. Ms. Hendee paints an excellent picture of this noble family and how they all react to life changing events with vivid mental images.

The story-line is absolutely outstanding. I adored it! The main character, Lady Nicole, is faced with some extremely tough choices when she learns by accident a major secret that her sisters is carrying her lover’s child and is engaged to another prominent young noblemen. This marriage is needed for an alliance that will allow more protection for her families lands and their people. The matter is complicated further by the affection Lady Nicole shares with the girls’s intended future husband. There is quite a love triangle.

The novel has a very unique twist that is rather hard to explain. Lady Nicole is given three choices. Does she tell her brother? Does she say nothing? Does she reveal the entire scheme to her family? It is one of the hardest decisions she faces as a protected young woman who hasn’t faced many trials and struggles in her young life.

Every action has unforeseen consequences and the author does a well job driving that point home to the readers. The main character is forced to live out the results consequences for each of the three choices by a magic mirror. This was quite entertaining because despite reliving the same events three times, as a reader, I never did become bored. Each time you do over the scene, it is different and told entirely in a different pattern that you are able to focus on the hilarity of it all.

The best part is that Lady Nicole has no idea during each time that she is has been reliving these moments. All her actions are genuine and based off of who she is a character trying to find her way in a very difficult world. The book takes you through these scenes three times and yet as a reader I loved how this is set up. I became invested in the choices and what would be Lady Nicole’s decision in the end and how everything is going to turn out. The adventure of it all is had me engrossed for hours as I sat captivating by the story. I finished this book in one sitting. That is how much I enjoyed reading this authors work. I know this is a book in a set series and believe me when I say that I will be purchasing and reading more of this author’s other work.

I loved the setting and characters quite a lot.

The other leading characters in the story were all quite relevant to the plot and I found them very interesting. They fit the story quite well. I became engrossed with each other throughout the book. Nicole’s sister was easy to relate with because I grew up as the younger sister and honestly, how Nicole views and sees her sister is often how I felt about my older sibling. Bottom line, I love her very much and nothing will change that.

The most fascinating characters outside of Nicole and her sister Chloe is Lord Christophe. He is a lovely and admirable man. He has a family of his own that are not perfect just like Lady Nicole’s family. Lord Christophe’s sister and her two children live at his keep after being abandoned by her husband. The sister is a rather complicated and hard human being but as the novel progress, this changes. It was awesome to witness.

I highly recommend this book because it covers some really deep moral issues and human nature in such a comedic and compelling way. 5 out of 5 stars from me!

Ever since raiders from the north began attacking villages, Lady Nicole Montagna has known that defending her people would come at a cost. The betrothal of her sister Chloe to a neighboring lord seems the perfect solution, forging a powerful alliance. But shortly before the wedding, Nicole is shocked to discover that her sister is with child—and not by her husband-to-be. Now she must make a choice. She has just hours to decide . . .

~Should she tell her soldier brother—who will take swift, ruthless action to ensure the family’s safety?

~Should she hold her tongue, let her sister deceive her husband into believing the child is his—and then hope Chloe can get away with the lie?

~Should she tell her family, hoping they will know the right thing to do?

With the help of a magic mirror, Nicole lives out each path, fighting to protect herself and those she loves with the weapons she has: wits, herbs, and fortitude. But no matter her cleverness, neither she nor her family can escape unscathed—for there are repercussions she could never have foreseen, involving her own heart . . .

A CHOICE OF SECRETS

New York Times bestselling author Barb Hendee spins a tale of intrigue, integrity, and the bonds of love and loyalty as one young woman finds her place in a turbulent world . . .